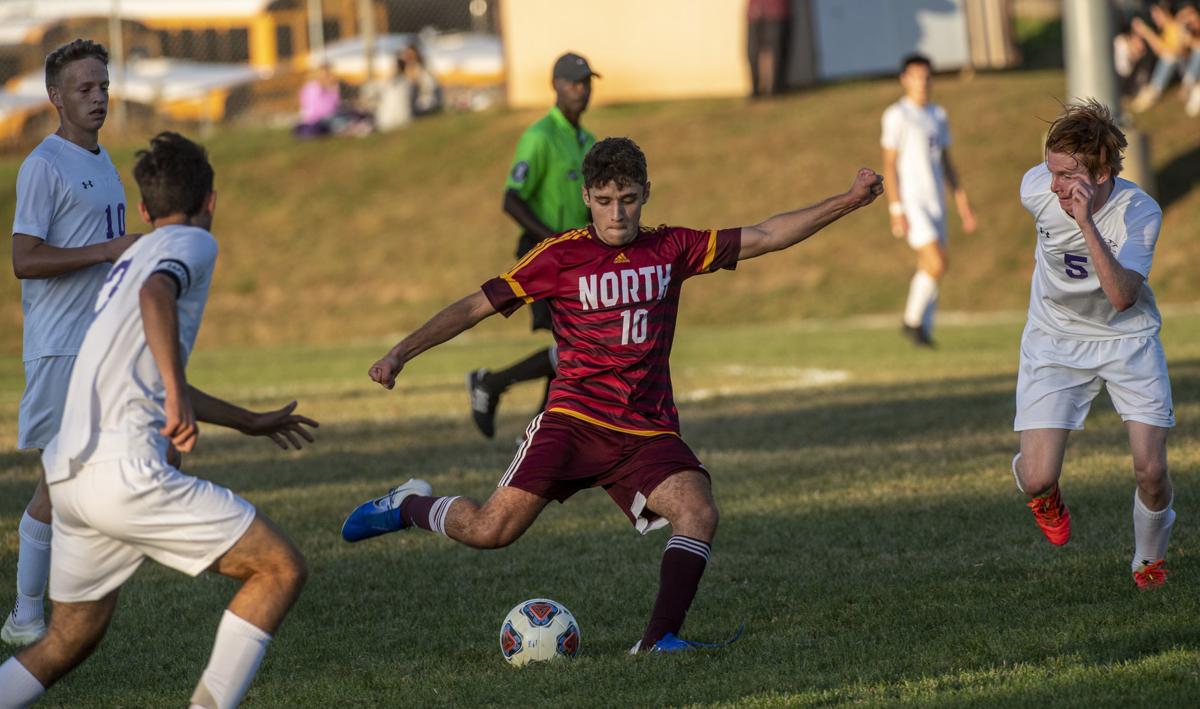 For 64 minutes on Wednesday night, there was nothing to separate Bloomington North and Bloomington South.

In a span of two and a half minutes, everything changed.

Josh Adams converted a penalty kick for the Panthers, and the Cougars’ disappointment lingered long enough for C.J. Santiago to tap one home 150 seconds later as host South claimed a 2-0 win in the 3A boys’ soccer sectional semifinals.

“It felt like a better game (than a 3-0 South win in the regular season), but two minutes,” North coach Hsiung Marler said. “We play 78 good minutes, and two minutes kills you. That’s all it took.”

In the first game, the Cougars (7-9-3) gave up a pair of early goals and never recovered. This time around, they dodged a few early bullets and were dangerous in their own right during a scoreless first half.

“Standing on the sideline, every minute the game goes 0-0, we get stronger, we’re getting better and the pressure’s on them,” Marler said.

And the Panthers knew it.

“It definitely was (tougher than the first game),” South coach Kevin Sparks said. “We had a couple early chances that if we put them away like we did in the regular season, then we would’ve been in the driver’s seat the whole game.

“But missing those kind of frustrated us. It gave North some confidence to keep pushing, and they played well. They had some opportunities, and I thought Ian (Holtz-Hazeltine) and Anthony (Gonzalez) for them in the middle were very decisive and dangerous, and Kaan (Silay) out wide. They could’ve struck first, and it would’ve been a different atmosphere, a different style game.”

The closest anyone came to scoring in the opening 40 minutes was Cooper Fox’s long-range blast off the top of the crossbar in the 37th minute.

That chance not withstanding, the break was exactly what the Panthers needed.

“We needed to get to halftime, so we could talk about what we were doing to ourselves,” Sparks said. “That was the big issue. We were causing a lot of their opportunities ourselves. Once we settled down and started finding feet more, and we started being more dangerous in the attack, the game shifted big-time.”

It shifted even more drastically when Fox was sandwiched on a ball chipped into the box, and the penalty kick was awarded.

Adams stepped to the spot, just as he did in the first meeting, prepared to play the necessary mind game with North goalkeeper Austin Himebaugh.

“The first thought was, ‘Which way do I think Austin’s going to go?’ Adams said. “The first time we played, I went left and he dove right. I told myself before the game if I got a penalty, I was going to go left, no matter where I thought Austin was going to go. I just said, ‘You know what, I’m going to stick with it and go left.’”

Himebaugh got his fingers on the shot, but it wasn’t enough to keep the ball out, and the Panthers had a 1-0 lead in the 54th minute.

Just over two minutes later, Fox centered a ball for Santiago, who tapped it in past Himebaugh to double the advantage.

“(The first goal) got us going,” Adams said. “Within our team, whenever someone works hard or gets a goal, the energy is contagious and everyone picks up on it and picks it up a little bit. When the crowd gets going, we can use that as well. It’s nice to hear a big crowd cheering for you where you almost can’t hear your teammates.”

The home team and crowd were both pleased. The visitors were not.

It was going to be one little break for either team, something to go one way or the other for somebody. It just unfortunately for us went for them,” Marler said. “”That PK really took the air out of the room.”

North eventually caught its breath, but by then the damage was done.